Before I get started with this review, which I am terribly excited about,  I wanted to state that I was gifted a copy of the book to review and be part of this amazing tour. Also, please check out all of the stops! 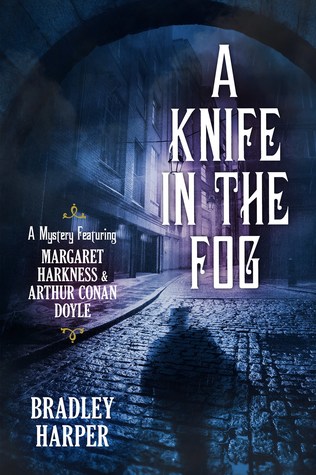 September 1888. A twenty-nine-year-old Arthur Conan Doyle practices medicine by day and writes at night. His first Sherlock Holmes story, A Study in Scarlet, although gaining critical and popular success, has only netted him twenty-five pounds. Embittered by the experience, he vows never to write another “crime story.” Then a messenger arrives with a mysterious summons from former Prime Minister William Gladstone, asking him to come to London immediately.

Once there, he is offered one month’s employment to assist the Metropolitan Police as a “consultant” in their hunt for the serial killer soon to be known as Jack the Ripper. Doyle agrees on the stipulation his old professor of surgery, Professor Joseph Bell–Doyle’s inspiration for Sherlock Holmes–agrees to work with him. Bell agrees, and soon the two are joined by Miss Margaret Harkness, an author residing in the East End who knows how to use a Derringer and serves as their guide and companion.

Pursuing leads through the dank alleys and courtyards of Whitechapel, they come upon the body of a savagely murdered fifth victim. Soon it becomes clear that the hunters have become the hunted when a knife-wielding figure approaches.

A Knife in the Fog is truly a wonderful atmospheric historical fiction murder mystery book that mixed the perfect amount of fact and fiction.

One of the most notable things about this book was the fact that it felt very accurate to the time period that was being written about. Not only does Harper take one of literatures well known figures, Arthur Conan Doyle, he embodies the time period. You can tell that author has done his research. He knows the use of language at the time well, clothing, customs, and social hierarchy. It is far from a haphazard combination of these vague ideas, which for me is a huge deal. In addition to being well versed in the time period, he is also very knowledgable about the Jack the Ripper case. This knowledge is essential since our three main characters are on the hunt for this vicious murderer.

While the author fuses fiction with the real life case of Jack the Ripper he also pulls from real world individuals such as, Professor Joseph Bell and Miss Margaret Harkness. In doing this it really brings this story to life for me. The characters were wonderfully written and had very distinct personalities. Professor Bell, the inspiration of Sherlock Holmes, was very much observant, interesting, and not afraid to speak his mind. Miss Harkness was a strong woman who was not afraid to do what she needed to do to tell her stories as well as help with this investigation. She was truly a wonderful strong character in this novel and I loved how bold she was.

Throughout the story the character acted true to themselves as different obstacles were presented to them. Between walking the unsafe streets, helping people in need, going to the police station, and murder scenes I was truly entertained by the story and plot. I laughed when they called themselves the Three Musketeers because I was actually thinking that were like the three musketeers before they said it themselves. Three great characters taking a very dangerous and risky mystery with some humor tossed in for good measure.

At times there were events that happened for the sake of happening to showcase something. But, it wasn’t out of character. It still felt like it belonged in the story and it didn’t take away from the story. But, a few things happened in the story were I was felt like it was kinda random just to show us something that needed to be established. While it might have felt random, the information gathered was needed and none of them were unenjoyable.

Overall, I really enjoyed this novel. I was very happy to find out that this is the first book in a series because I would be able to have another adventure this these characters, but also with this authors writing. I cannot stress this enough, this author does a wonderful job at building a very real atmosphere with what seems like minimal effort and that for me is a mark of a good writer. I highly recommend this book to those who enjoy historical fiction, mystery, murder mysteries, or if you have an interest in the Jack the Ripper stories or Arthur Conan Doyle.

About the Author: Bradley Harper 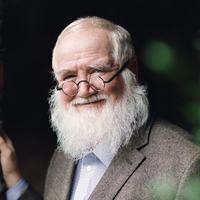 Bradley Harper is a retired US Army Pathologist with over 37 years of worldwide military/medical experience, ultimately serving as a Colonel/Physician in the Pentagon. During his Army career, Harper performed some 200 autopsies, 20 of which were forensic.

Upon retiring from the Army, Harper earned an Associate’s Degree in Creative Writing from Full Sail University. He has been published in The Strand Magazine, Flash Fiction Magazine, The Sherlock Holmes Mystery Magazine and a short story he wrote involving Professor Moriarty in the Holmes tale of The Red Headed League (entitled The Red Herring League) won Honorable Mention in an international short fiction contest. A member of the Mystery Writers of America, Authors Guild, and Sisters in Crime, Harper is a regular contributor to the Sisters in Crime bi-monthly newsletter.

Harper’s first novel, A Knife in the Fog, involves a young Arthur Conan Doyle joining in the hunt for Jack the Ripper, and was a finalist for the 2019 Edgar Award by the Mystery Writers of America for Best First Novel by an American Author.

Queen’s Gambit, the upcoming sequel to A Knife in the Fog will be released in September 2019.