Hello and welcome to another post! I am excited to share my Book of the Month this month because I ended up with three books. Oops! Since I am a BOTM BFF ( I have been subscribed for more than 12 month, time flies when reading good books!) I get the to pick one of the Book of the Year Nominations for free as a thank you from them. Then I decided to add an extra book, because I had such a hard time deciding on just one. Anyway, here are the books! 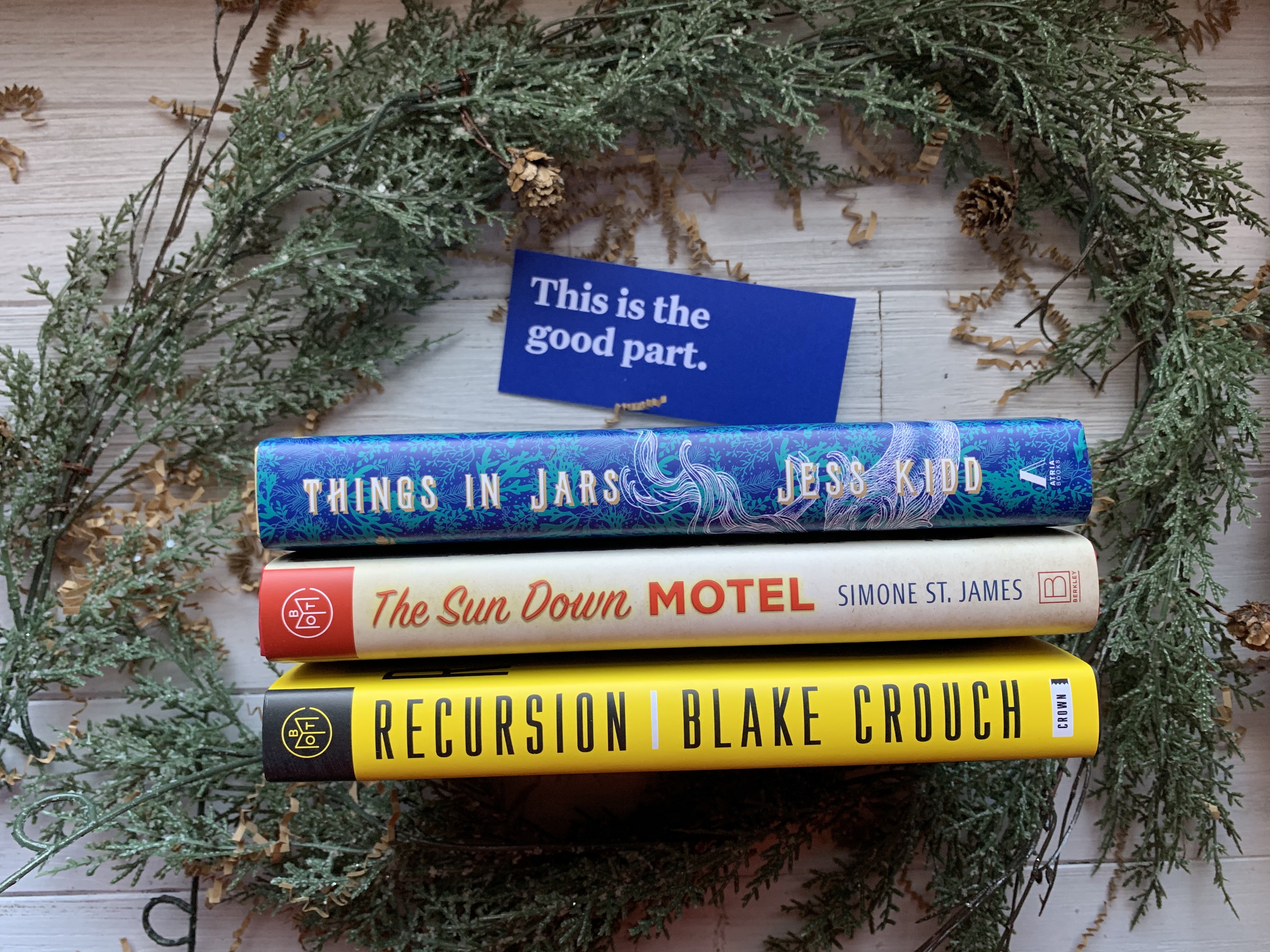 As I said, I had a hard time choosing between two books, these two were Things in Jars by Jess Kidd and The Sun Down Motel by Simone St. James. Simone St. James wrote the The Broken Girls and I read it last year and I ADORED it, so when I saw another one of her books on here I wanted it. But, I then read the description of Things in Jars. This book is a combination of macabre with ghosts, supernatural elements, but also a Victorian mystery led by female detective. I was sold, so I ended up picking both books, one of thee beauties of BOTM. Now, Recursion by Blake Crouch was my free pick from their Book of the Year finalists. It sounded really interesting and different, so I am also excited to give this one a go as well. Below are the descriptions of all three of the books.

“Bridie Devine—female detective extraordinaire—is confronted with the most baffling puzzle yet: the kidnapping of Christabel Berwick, secret daughter of Sir Edmund Athelstan Berwick, and a peculiar child whose reputed supernatural powers have captured the unwanted attention of collectors trading curiosities in this age of discovery.

Winding her way through the labyrinthine, sooty streets of Victorian London, Bridie won’t rest until she finds the young girl, even if it means unearthing a past that she’d rather keep buried. Luckily, her search is aided by an enchanting cast of characters, including a seven-foot tall housemaid; a melancholic, tattoo-covered ghost; and an avuncular apothecary. But secrets abound in this foggy underworld where spectacle is king and nothing is quite what it seems.

Blending darkness and light, history and folklore, Things in Jarsis a spellbinding Gothic mystery that collapses the boundary between fact and fairy tale to stunning effect and explores what it means to be human in inhumane times.” –goodreads.com

The Sun Down Motel by Simone St. James Description

“The secrets lurking in a rundown roadside motel ensnare a young woman, just as they did her aunt thirty-five years before, in this new atmospheric suspense novel from the national bestselling and award-winning author of The Broken Girls.

Upstate NY, 1982. Every small town like Fell, New York, has a place like the Sun Down Motel. Some customers are from out of town, passing through on their way to someplace better. Some are locals, trying to hide their secrets. Viv Delaney works as the night clerk to pay for her move to New York City. But something isn’t right at the Sun Down, and before long she’s determined to uncover all of the secrets hidden…” –goodreads.com

That’s what New York City cop Barry Sutton is learning as he investigates the devastating phenomenon the media has dubbed False Memory Syndrome—a mysterious affliction that drives its victims mad with memories of a life they never lived.

That’s what neuroscientist Helena Smith believes. It’s why she’s dedicated her life to creating a technology that will let us preserve our most precious memories. If she succeeds, anyone will be able to re-experience a first kiss, the birth of a child, the final moment with a dying parent.

As Barry searches for the truth, he comes face-to-face with an opponent more terrifying than any disease—a force that attacks not just our minds but the very fabric of the past. And as its effects begin to unmake the world as we know it, only he and Helena, working together, will stand a chance at defeating it.

But how can they make a stand when reality itself is shifting and crumbling all around them?”- goodreads.com

So there you have it, the three books I received in my January BOTM! I am so excited about jumping in and read these titles this year.

QOTD: Have you read any of these books? Which one would you have picked? Do you subscribe to a book box? If so which one?