Thursday 11th: Spell List
We’re all familiar with Book Spine Poetry by now. No? Stack up your books in an order that allow the titles to create a poem. For this prompt we’re using horror or Halloween themed books only to line up and create Book Spine Spells!

Oh goodness, this was a hard one for me. I was never good at poetry. The only time I enjoy writing poetry is when it is blackout poetry. So this one was a prompt I was kind of dreading, but over all it didn’t turn out as bad as I thought it would be. So without further delay here is my spooky book spine poetry!

in the darkest part of the forest

in the days of rain

from here to eternity 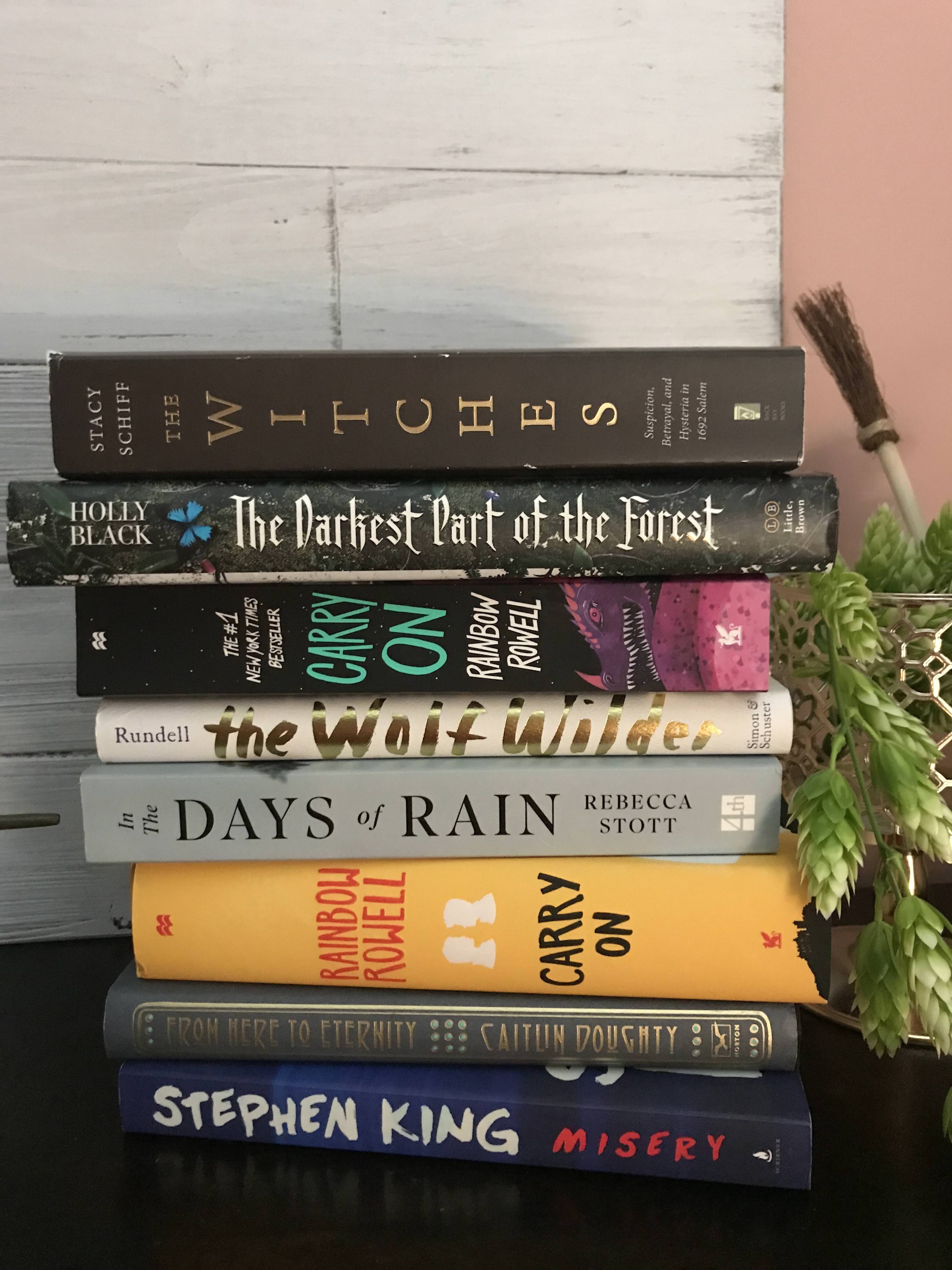 What is your favorite poem or poet?

Prompt: Friday 5th: Creepy Crawlies
What fictional monsters/creatures would you hate to encounter? 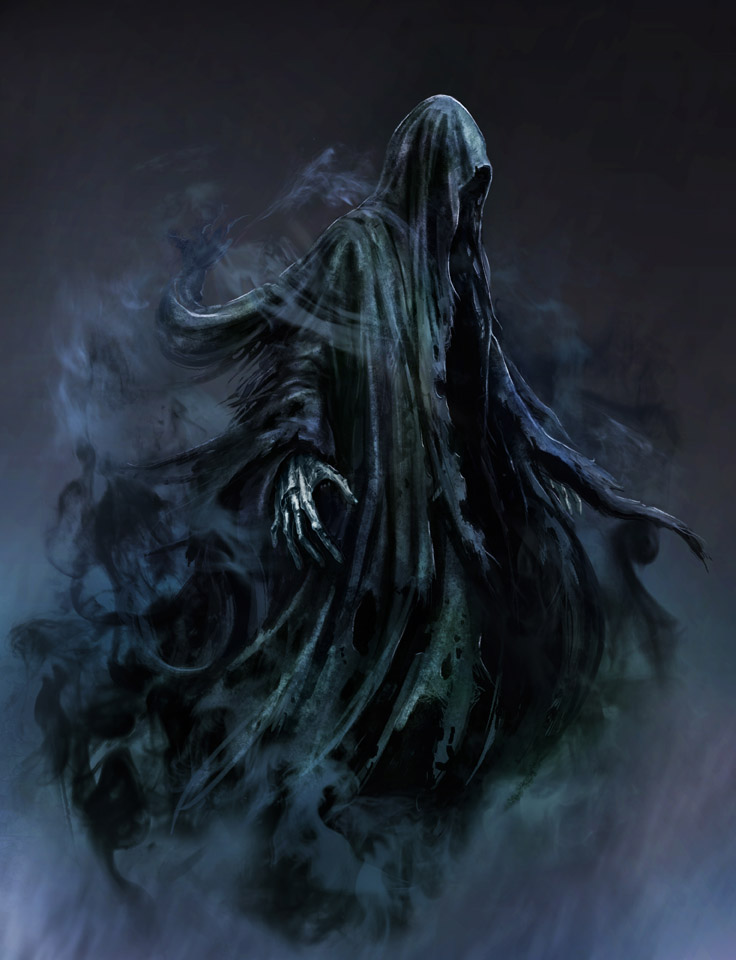 Alright, I thought long and hard about this and I think the worst fictional creature or monster, one that I would really hate to meet and it would have to be a Dementor from Harry Potter. I mean it is a faceless creature shrouded in torn and eerie black cloak, if you can even call it that. It makes everything cold, I absolutely hate the cold. It takes all of the happiness and makes you feel like it will never come back. It is a horrid creature even if you are passing by it on the street. If you happen to get its attention it can give you a “kiss” and steal your soul. I don’t know about you, but I want nothing what so ever to do with a dementor.

What creature would you hate to meet?

This is the first Stephen King Novel I have ever read, but I am very familiar with movies based off of his work. I saw this when I was in my local bookshop and decided it was time to read some of his work.

Bag of Bones follows an author named Mike Noonan four years after the unexpected death of his wife. At the start of the book Mike is having nightmares about a lakeside cabin he owns, but has not visited in a long time. He decides to face his fears and returns. He ends up at odds with a millionaire and receives strange messages from ghosts that haunt the town. As times passes he discovers a deadly secret as he gets more involved with a widow and her young daughter.

Over all I really enjoyed Bag of Bones, I already went out to purchase another one of Stephen King’s novels. I thought the supernatural aspect was done in a very interesting way and I found the reason for the haunting and the mystery to be very powerful. You find yourself sympathetic to those who have passed as well as Mike and those he cares about. Mike Noonan’s journey was well done. The relationships he grows and losses, the way he investigates, and his over all personality was well done. What I did not fully enjoy was that that reason he was “seeing” some particular dealing with the young girl was not fully explained, but it mostly explained in my option. This is not something major and is easily looked over and does not hold up the story in anyway.

I ended up giving this novel a 5 out of 5 stars! I really enjoyed the rawness of his writing, he isn’t afraid to be callous or hold back, which I find refreshing. I am very glad I picked up this book and like I said I already picked up another one of his works. If you enjoy reading ghost stories, interesting character development, and a good mystery I would say pick this up right away.

Just finished this wonderful collection of speeches made by Greta Thunberg. Such a well spoken and driven individual. . . . . . #nonfictionbooks #nonfiction #gretathunberg #climateactivist #activism #recentread #recentreads
A little peak into my February TBR. These three are my priority this month so fingers crossed I am able to get to them all. What book are you reading this month? . . . . . #ducksnewburyport #manbookerprize #tbr #february #stephenking #thelangoliers #horror #literature #lucyellmann #shakespeare #othello #playwright #classic
I just wanted a moment to share my current read Girl, Woman, Other by Bernardine Evaristo. I am reading this for my read a shortlist challenge where I read the entire shortlist for the 2019 Man Booker Prize. So far I am enjoying and I am intrigued to see where it goes. . . . . . #manbookerprize #girlwomanother #bernardineevaristo #literature #currentread #currentlyreading #ownvoices #readersofinstagram
I finally have my hands on one of my most anticipated releases this year! The Hazel Wood by @melissaalbertauthor was a master piece and I feel like this is going to just as magical. . . . . #januaryrelease #thenightcountry #thehazelwood #ya #fantasy #fairytale #melissaalbert #bookhaul
About to finish this really powerful Nonfiction that deals with a man leaving the safety of the US to travel to Nazi Germany during WW2. I don’t want to give too much away, but the title itself gives enough away. If it peaks your interest, I suggest you read it. . . . . #bonhoeffer #ericmetaxas #ww2 #nonfiction #nonfictionbooks #historic #biography #currentlyreading
Thanks to the publisher! I am so excited to have won a giveaway for A Matter of Interpretation by Elizabeth Mac Donald, I feel like it is going to be a fun read! . . . . . #fiction #historicalfiction #13thcentury #amatterofinterpretation #elizabethmacdonald #fairlightbooks #bibliophile #bookhaul