Hello and welcome to my monthly intent post for the month of September! It is so strange to think about that fact that we are moving into the last 3rd of 2021 already. I feel like the year has just started, but is also ending so soon. Time, what a weird thing sometimes. Anyway, here are the things I hope to read, do, and maybe even experience over the next month!

This month I really want to reread The Hobbit by JRR Tolkien. I am not sure why, but The Hobbit and Lord of the Ring Trilogy just screams fall and early winter to me. I feel like September is the perfect time to start since the weather generally starts to shift a little chillier throughout the month. The second book I really hope to finish would be to finish my current read The Domestic Life of the Jersey Devil: or, BeBop’s Miscellany by Bill Sprouse. Nothing like reading some folklore of your own state! I grew up knowing about the Jersey Devil and such, but I thought this would be a fun look at this cryptid.

Since I took up knitting socks last month I want to finish the other sock and make it a pair. I also started working on a cowl to use this winter I would love to have completed before it is needed. Other than that I don’t really have any goal projects I feel like I MUST work on. I think I am going to be a mood crocheter when I pick up a new project from my stash.

I think this month I would really love to go apple picking. I am always eating apples year round, but I think it would be really nice to grab a few myself. Other than that I am hoping I am able to relax a bit and maybe get to sit by the fire pit a few more times before it gets too cold at night. I love being outside so much and I really want to milk this weather for as long as I can because once it is cold I am locking myself inside. I do not do well with the cold.

What are you planning on doing this month?

I was tagged by the wonder Whit over at Whit Reads Lit, you should all check her blog out and her other social media accounts, she is so kind and sweet and talks about some pretty awesome books. Anyway, when she tagged me in this I was so happy because it is such a fun tag and asks some pretty fun questions about a literary dinner party.

1: One Character Who Can Cook/Likes to Cook

Sally from Practical Magic, she is always cooking good food for her family even at a young age so she has to be a pro by now.

2: One Character Who Has Money to Fund the Party

Feyre from the Court of Thorns and Roses, I mean she is a High Lady so she has to have some series resources.

Weylyn Grey from Beasts of Extraordinary Circumstance by Ruth Emmie Lang, I mean he lived with wolves and odd occurrences always seem to follow them.

4: One Character Who is Funny/Amusing

Fred/George Weasley from the Harry Potter series… they are one character because you cannot separate them!

5: One Character Who is Super Social/Popular

I honestly cannot think of a single character/person for this, fiction or nonfiction.

Bellatrix Lestrange, once again from the Harry Potter series, because I feel like she may be a more controllable villain? Also, she is an aristocrat and probably knows a lot about dinner parties.

7: One Couple – Doesn’t Have to Be Romantic

I am going to go non-fiction here and pick Teddy Roosevelt and Eleanor Roosevelt. I would love you have them both at a tea party. Such interesting human beings.

Bilbo Baggins, from The Hobbit and the Lord of the Rings series, because he is the best adventurer and hero! He would have loads to talk about.

Raven from the DC comic book universe. I say she is underappreciated because I feel like they could throw her into more than teen titans. Although, lately she was given her own comic book, so many I am wrong here?

10: One Character of Your Own Choosing

May from Little Women, because she is such a nurturing and lovably strict character I think she would be able to keep everyone in line.

Hello and welcome to the third installment of  Annotating my bookshelf! This time we are taking a look at my somewhat color coded shelf. I am not sure how must some of my shelves are color coded and the others aren’t, but this one ended up being a shelf of black and gray books. I hope you enjoy! 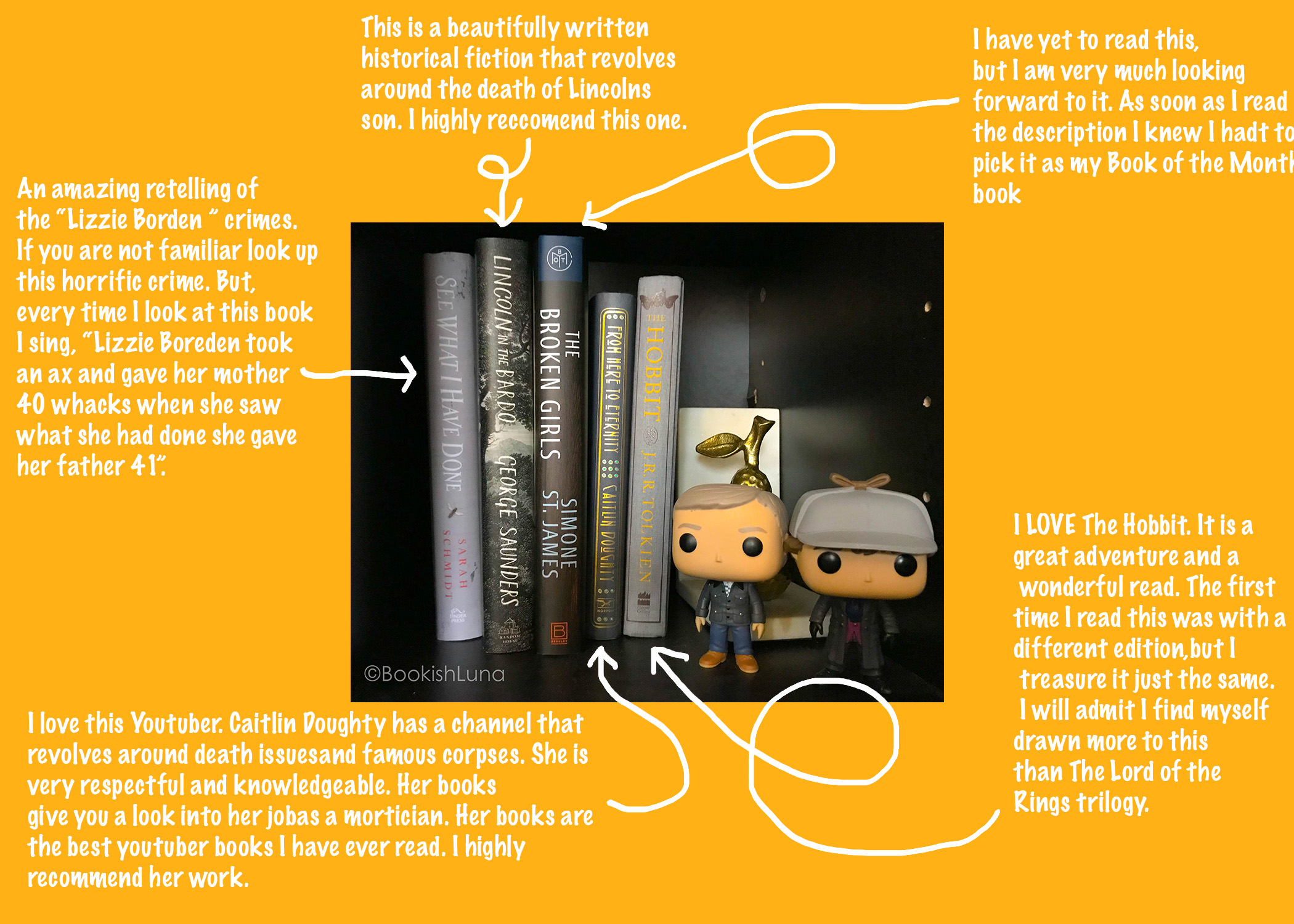 From Here to Eternity: Traveling the World to Find the Good Death by Caitlin Doughty

The Hobbit by J.R.R. Tolkien

Have you read any of these books? Are they on your TBR?

Hello all, today I am here to share a tag. I was lucky enough to be tagged by Regina from Bookish in Bed to complete the Ace of Spades Book Tag. This is an awesome tag that surrounds the book written by Amanda Foode, how fun is that? Sadly, I myself have not read the book, but these questions made me even more intrigued. Anyway, without further delay, to the tag!

1. Ace of Shades takes place in the very mysterious, very dangerous City of Sin. Name a fictional city with a personality of it’s own!

This may be a catch all answer, but Hobbiton and Bag End. I feel like this little town is just magical. I love the Hobbit and I always liked the start of the book and imagined all the things that happen there.

2. The City of Sin is home to three ruthless gangs: the Irons, the Scarhands and the Doves. Tell us about your favorite fictional criminal family/gang!

Honestly, I can’t answer this. I don’t really have a favorite fictional criminal gang. The only one that really pops into my head are the characters from the Bone Season. So I shall go with that!

3. Enne and Levi are about to be thrown into a deadly game… Name your favorite book in which the characters must play with, and for, their lives.

The only character that comes into my mind is Sherlock Holmes. While he does not “play” for his life. He often has to play mental chess to solve a murder and keep himself and Dr. Watson safe.

4. The Doves are a gang of assassins… What book you’d kill to have in your hands right now?

Right now all I want is to have Stephen Kings new book in my hand. It is called the Outsider and comes out in May.

5. The City of Sin is full of people with dark and complicated pasts. Name one book or book series you used to like, but don’t anymore.

Sadly, I loved Sleeping Giants, but I have since lost interest. It is not fault of the series itself I am just a huge mood reader. Chances are I will end up liking it again in a few months or years.

6. With complicated pasts abound, we can find many… burnt cinnamon rolls, so to speak. Name a character that has prickly and tough exterior, but is actually a sweetheart deep down!

Gah, I have no idea how to answer this, sorry!

7. Not only anti-heroes live in the Ace of Shades world! In New Reynes, one can find plenty of villains as well. Which bookish character do you just love to hate?

I love to hate Dolores Umbridge. She is a horrid character, but I have to admit so well written. 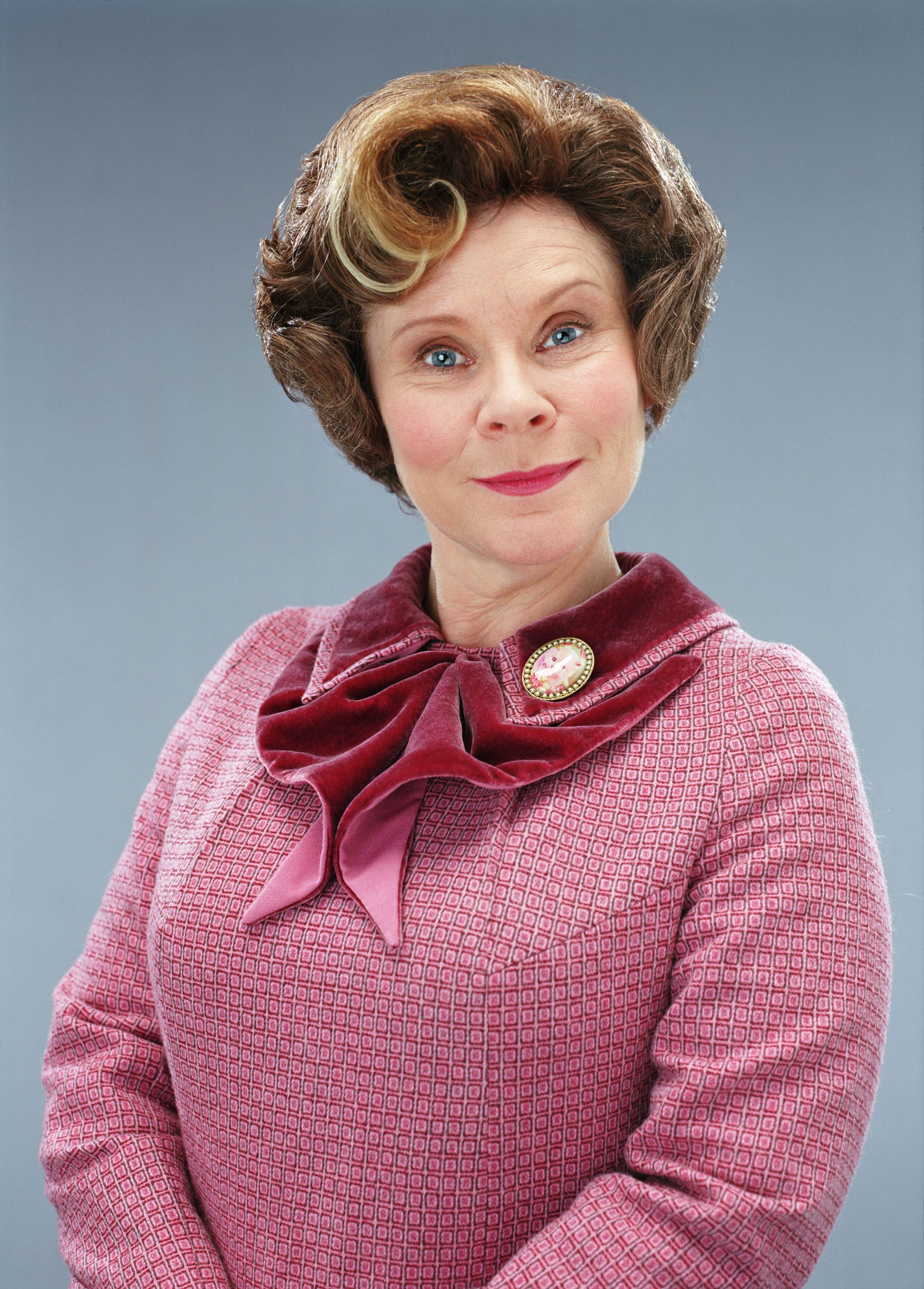 8. You, much like our main character Enne’s mother, went missing in the City of Sin. The main character from the last book you read is the one looking for you… How screwed are you?

Well, it seems like I am in the World of the Dead. I don’t want to say the book because it may be a spoiler if you have not read it just yet. Sorry to be so vague.

Are you interested in Ace of Spades by Amanda Foode?